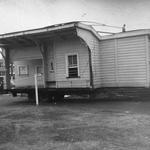 Description
The removal of the Hamilton railway Station. The station which was built in 1879 was relocated to the University of Waikato. It was used as a senior Common Room on the campus until it became a public cafe and restaurant. The wooden building became derelict shortly after the railway was lowered and a new underground station was built. Here it has been placed on a trailer ready for removal. A workman is on the roof securing it.