Description
Bertie John McKee was born in 1897, and before enlistment worked as a farmer. He embarked on 13 November 1917, on the Tofua, as a member of the 32nd Reinforcements, Mounted Rifles Brigade, destination Suez. Bertie McKee survived the war, and in 1921 married Lilian Mary Coate. He died in 1968, aged 70, and is buried in the Tauranga Presbyterian Cemetery. It seems likely that this identification is correct, as the soldier in the photograph wears the collar badges worn by the 25th to 47th Mounted Rifles Reinforcements. This being so, the older couple in the photograph would be his parents William John and Frances McKee. The younger woman has not yet been identified. 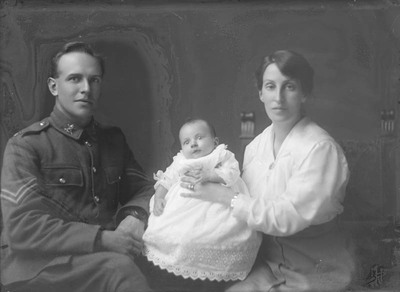